The traffic on both River Street and M-22, so light as to be almost theoretical, came to a halt just long enough for the truck to pull across, heading east. It was pulling a trailer, atop which was a weathered, 42-foot-long fishing boat. The truckâ€™s red and the boatâ€™s banged-up green and gray carved into the backdrop, a sky of translucent blue.

It was late November of last year, and Joy was heading inland for the latest round of maintenance and improvements Fishtown Preservation has undertaken over the past ten years.

Both Joy and Janice Sue are active commercial fishing vessels; they need to be both functional and safe for the fishermen who operate them. Joy has had more changes over the years than Janice Sue, mainly because sheâ€™s been, since her creation, something of an experiment.

Ross Lang had been, with his father, a commercial fisherman in Leland since the late 1960s, fishing from the Frances Clark, a gill net boat. By 1980, however, Ross faced a choice: begin fishing with different nets, or get out of the fishing business. He chose to fish with new trap nets, a fundamentally different system, and that meant choosing a new vesselâ€”or building one, which he did with the help of a friend and experienced craftsman, George Stevens. They built Joy at Georgeâ€™s farm in East Leland.

Speed on the water mattered to Rossâ€”more speed meant more efficiency, meant lifting more nets each hour on the waterâ€” so he kept Joy as light as possible. One compromise was to keep interior structural supports to the minimum. It did keep the weight downâ€”but the boat twisted and bent on rough water, and walking on her was like walking on a giant metal drum where, at each step, the deck flexed down and then boomed back into place. 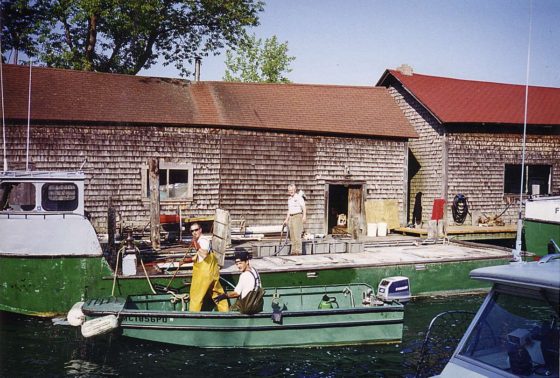 Ross Lang (on the dock) and the Joy, 1980s (courtesy of Joy Lang Anderson)

In 2008, Geoff Niessink, a grandson to Captain GeorgeÂ  Grosvenor, and Joel Petersen, a commercial fisherman and captain of the Joyâ€”both of them skilled boatsmen and masters of weldingâ€”added additional structural supports, as well as replacing sections of the 1/8-inch steel that had rusted thin.

They also wanted to raise the sides of the Joy, to increase stability as well as to make standing on Joyâ€™s deck less precarious when lifting fish or just moving around, but that had to remain on their wish list. The next time she was out of the water, they hoped, theyâ€™d have a chance to do the sides.

Eight years later, the chance came. When Joy came out of the water for a fresh coat of marine paint, we had the chance not only to raise her sidesâ€”by nearly a footâ€”but also to replace the worn-out motor for the net-lifting hydraulics and to put on a new propeller.

Joy never had a propeller fitted for both her size and the power of her engine, a 350-horsepower Cummins 6CTA. In our first overhaul we kept the propeller she had when we bought the operation in 2007. Later Jerry Vanlandschoot and Joel Petersen borrowed a propeller that might fit a little better from Joey Peterson, a commercial fisherman on the Garden Peninsula. Whenever Joey would see me at meetings about commercial fishing, heâ€™d inquire about the goings-on in Leland by asking, â€œHowâ€™s my propeller?â€

The work in 2008, for both Joy and Janice Sue, had taken place at the Northport Bay Boat yard, where a lack of indoor space meant we had to build a temporary shelter, rigged with utilities, to do the work through the wintry off-season. For this stage of work, though, we found a perfect place right in Leland: Nick Lederleâ€™s impressively well-equipped machine shop, located near Stander Marine.

Geoff and Joel worked on Joy for nearly three months, finishing this past February. I knew I wouldnâ€™t fully appreciate all the work theyâ€™d done if I didnâ€™t see it in progress, so I stopped by every couple of weeks. Iâ€™d arrive to pieces of unshaped steel, sparks flying, and a duet of machine sounds coming from various parts of the shop. They would politely point out a few things in-progress then turn back to their work, and Iâ€™d leave with my hair and clothes smelling of the peculiar, varied and occasionally toxic smoke that floats around the ceiling of an active machine shop. Outside, in the early dark of that time of year, Iâ€™d find the muffled sounds familiar and oddly comforting. 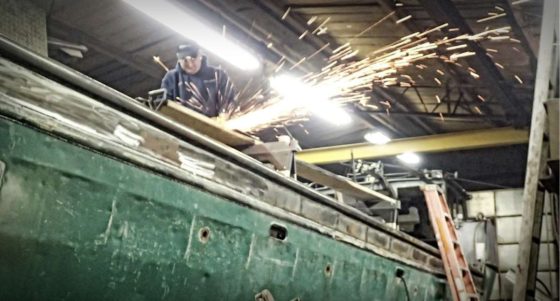 Geoff Niessink at work on the Joy (photo by Amanda Holmes)

The journey to the shop had been a utilitarian one, but the trip back through an otherwise deserted Leland took on the trappings of a quiet, solemn parade with Joy as the Grand Marshal. Geoff, like many of those who have served as crew in recent years, is a volunteer fireman. When Tim Newman, at the wheel of his Kasson Contracting rig, pulled Joy from the machine shop just before noon on February 27, half a dozen trucks followed, most driven by firemen who honored the history and the new life of the Joy.Â  There are moments when you realize you have become witness to something far bigger than yourself, that you are seeing made visible the thread of a community of place and of work, that what you thought was a singular event is in fact just the latest knot on that unbroken thread. No boat, I realized, could be better loved.

When she returned to the river, Joyâ€™s sides glistened black against green. She looked strong and seaworthy, ready for the season ahead. Fresh paint, retooled engines, steel braced and raised and patchedâ€”Joy and the dozens of fishing vessels that came before her have been the lifeblood of Fishtown. They are the dreams of an entire community, molded into metal and laid with care into the waters.

Stop the traffic. Joy is coming through. 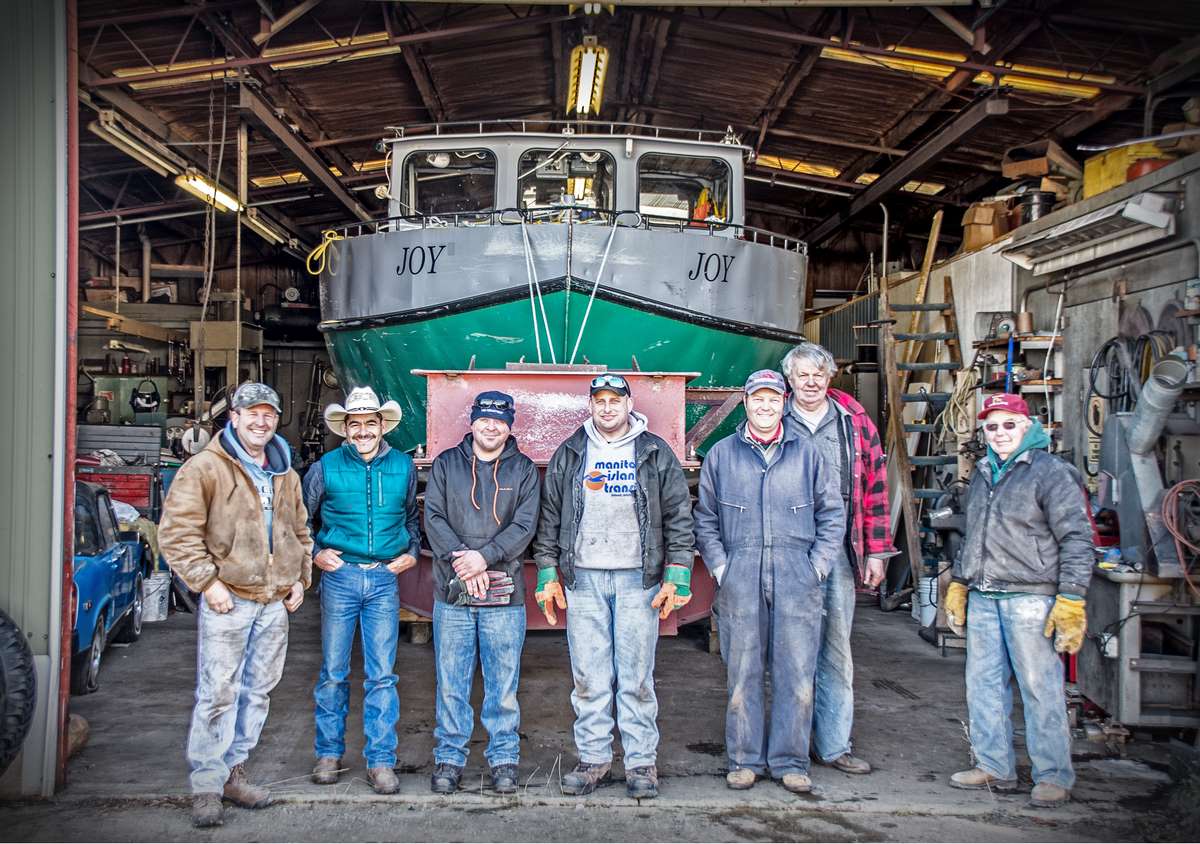