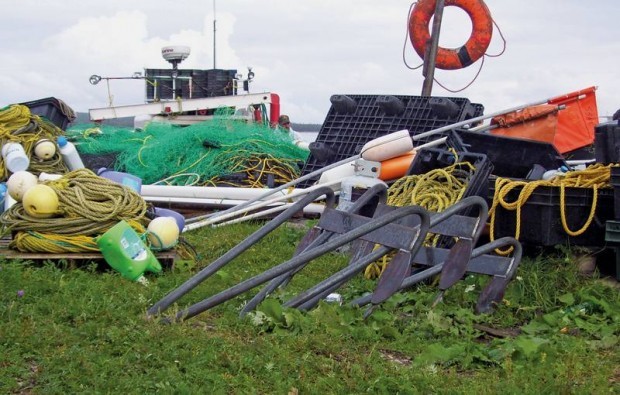 Trap net anchors in Naubinway, Michigan, made by Jim McLaughlin

There are 10 of them, and without them our efforts would drift, without aim or purpose. Three different 10s make preserving Fishtown possible�and worthwhile.

The first is our 10 fishing nets. The mission of the Fishtown Preservation Society is to preserve not only Fishtown the place, but also the practice and culture of commercial fishing that created Fishtown�and all the many fishtowns that used to exist. So we fish. From one of our two tugs, the Joy, a hardy group of longtime fishermen set what we are allowed under our state whitefish license: 10 nets.

Each of these 10 nets requires another 10�10 fishing anchors. The trap nets we use, though visible only as a few bobbing buoys and jugs on the surface, are hundreds of feet long, with leads stretching a thousand feet. These trap nets corral whitefish above a certain size, all kept alive and swimming until fished from the net by our fishermen, who toss back the undersized whitefish or other fish caught by happenstance.

We call supporters who pledge to give at least $500 annually to our operating fund our Fishtown Anchors. They are to the Preservation Society what the anchors are to Fishtown�s fishermen�anchors keep us grounded, and they keep us working. Anchors keep us going, and we are looking this year to grow, reflecting the number of our net anchors, to at least 10 times 10�100?Fishtown Anchors.

As our Fishtown Anchors logo shows, our fishing anchors are different than the types of anchors used to hold a boat in place. They are also distinct, because almost all trap net anchors are made by hand, with many commercial fishermen making their own. They are all steel and generally V-shaped, with solid teeth to bite into the lake bottom. Otherwise, though, they are as individual as those who make them, weighing anywhere from 60 to 90 pounds.

One reason the anchors are so varied is because they must match the fishing conditions. The Joy fishes in the Manitou Passage, which is particularly challenging because the banks are so steep, and the two lead anchors used with net must be heavy. However, Fishtown had only lighter anchors, a problem we had to solve as the fishing season approached.

I�ve come to appreciate the appeal of an elegant anchor, and last fall I�d noticed a beautiful trap net anchor on the shore in Naubinway, in Michigan�s Upper Peninsula. I contacted several welders to see if they could produce something similar. When none could, I decided to track down the maker of the anchor I�d admired. Two weeks later, just in time for the start of fishing season in the spring, FPS had twenty new lead anchors, crafted by Upper Peninsula welder Jim McLaughlin. His anchors are those we use in our Fishtown Anchors logo.

Right now there are 65 Fishtown Anchors, all committed to strong financial support for Fishtown, who�just as quietly as their namesakes, but just as surely�make what we do possible. Will you help us to reach 100 Fishtown Anchors?

Will you help to keep us fishing? 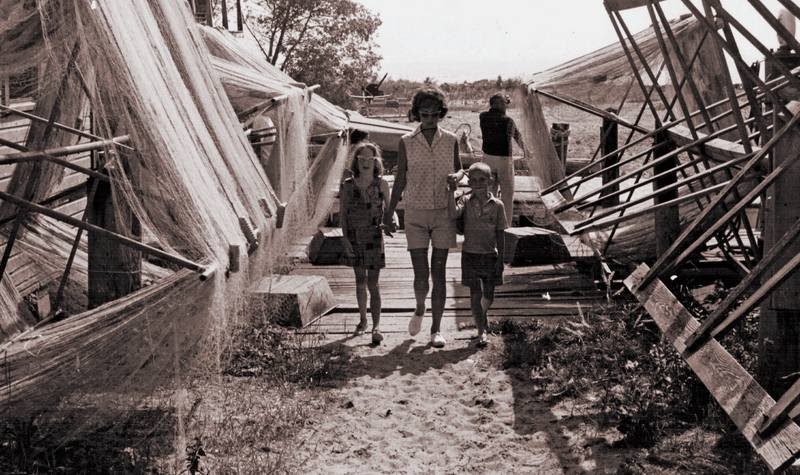 The Passarelli family in Fishtown, mid-1960s