Arriving at the docks thirty minutes prior to the posted departure time of 10:00 AM on Wednesday, June 23rd, I could tell it was going to be a beautiful day for hiking. The sun was out with only a few puffy clouds in the sky, and a slight breeze made it just cool enough that I only needed a light jacket. The ferryâ€™s home port is at the west end of Fishtown, in Leland. My friend and I boarded the Mishe Mokwa a little early to secure a good spot for the hour and a half journey to South Manitou Island.

I brought along a small journal, binoculars, snacks, and a large water bottle since there is nowhere to buy food or get water on the island. Having heard that weather can strand visitors on the island, I made sure I had enough food to last me at least three full days, although we would only be gone for the day. As my fellow passengers continued to board, I could tell exactly who was heading out for a day trip like us, and who was planning on camping a few nights. Some groups were wearing sneakers and small backpacks with only enough room for a water bottle and a few snacks, while others tramped in with giant packs complete with bedrolls and tents. Some kids casually walked in with packs nearly twice their size on their backs! Everyone was vying for a seat and a spot for their gear, though the atmosphere this commotion created was one of pure excitement and anticipation for the upcoming boat ride.

Gabby and friend after arriving on South Manitou

Once we headed out on the lake, the shimmering water was breathtaking. I constantly had to remind myself that the crystal blue waters that surrounded me were a part of Lake Michigan, and not some tropical island destination. We arrived at the South Manitou dock at 11:30 AM, and while a few passengers and I departed the boat, others stayed aboard to travel to North Manitou about three miles away.

I was awed by the pale, sandy beaches and historical Coast Guard buildings nestled within the deep green trees. All I could hear was a light rustling of leaves and small waves lapping against the shore when heading down the dock away from the ferry. I immediately relaxed, already understanding why so many visit these islands as often as they can.

My binoculars hanging at my hip, I make my way to the start of the hiking trail. My friend and I had planned what route we would take before arriving, but I was still unsure what to expect. The map had made the island look small, but I realized as we made our way down the trail that the dotted lines on the page represented much longer distances than I first thought. There were so many new spots to find and explore, and we had approximately four hours before we needed to be back at the dock. I knew we would have to make some difficult choices when determining what spots we most wanted to visit.

First, we decided to head to the wreck of the Francisco Morazan, a cargo ship that was blown of course and ran aground in 1960. About half of the ship still sticks out of the water, creating a strange yet fascinating sight. The steel is aged and weathered from the years, and the structure is now home to hundreds of gulls and double-crested cormorants. We had to hike a couple miles into the island to reach it, a slow, almost imperceptible incline leading to a high look-out point that allowed for an amazing view of the wreck.

After eating a quick lunch on a fallen tree on the edge of the overlook, we made our way back through the quiet woods. Passing only a few other hikers, it seemed as if we had the island to ourselves. We sometimes chatted about the things around us, such as the friendly toads or scampering chipmunks, but we also shared a comfortable silence on many parts of our trip. It was wonderful to focus solely on the sounds of our boots on the trail, and let our minds take a break from the usual distractions as we hiked along. 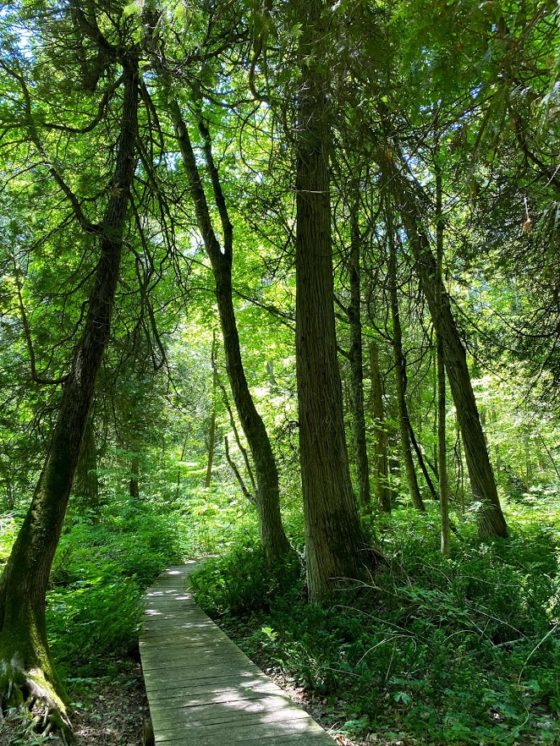 Trail beneath the white cedar trees

Our next stop was to visit the old white cedar grove. Located only in one area on the southern side of the island, the trees are thought to be over 400 years old. Many of the trees on South Manitou were cut down for lumber and hauled away on ships, but these white cedars were untouched. As they grew, sand from the nearby dunes was carried to the grove and incorporated into the bark of the cedars. The rough sand would dull the axes and saws that the loggers used, so they avoided the trees altogether. This has allowed them to remain on the island today and be admired by the hikers passing through. Their immense size and twisting patterns amazed me, and they seemed to exude wisdom. After traveling a few extra miles inland to see the cedars, wandering beneath their winding branches was a true reward. Still feeling the coolness of their shade, we headed back towards the ferry dock.

If you travel to one of the Manitou Islands, make sure you arrive back to the dock with LOTS of time to spare. With the combination of nonexistent cell service and a misleadingly simple map, one wrong turn can mean disaster. We took a wrong turn on our way back and were anxious until we realized the trail we were on was just an alternate route from the one we took earlier, still leading to the dock. The trails were not always well marked, so make sure you plan your return route to meet the ferry on time, or you may sign yourself up for a spontaneous camping night.

Boarding the ferry with some time to spare and over 20,000 steps under my belt, I was excited to be able to sit down and not use my legs for an entire hour and a half, but I was a little sad as well. I wanted to be able to walk back over to the beach and watch as the sun got heavy in the sky and turned shades of pink and red. I wanted to search for a few more lovely rocks that burst with color the second you dunked them into the lake and revealed their vibrance. I wanted to step back into the forest and continue walking, with no worries or thoughts in my mind other than to keep moving forward.

It was simple to get lost in the natural beauty of South Manitou Island, but it was not so easy to leave it behind. You can depend on a breathtaking experience like no other when visiting the Manitous, but if youâ€™re like me, just make sure you bring lots of snacks.

My journey to the South Manitou Island sparked my curiosity to explore the Manitousâ€™ histories. The Manitou Islands, like Fishtown, are a cherished feature of Leelanau County. Separated by the Manitou Passage, the islandsâ€™ and Fishtownâ€™s histories are more closely intertwined than I realized. The islands served as important stopping points for ships traveling from Chicago to the Straits of Mackinac, but they also used to be home to some of Fishtownâ€™s fishing families.

In 1904, Nels Carlson moved his family from North Manitou Island to Leland. After hitching a team of horses to the logging sleds carrying their belongings, the family bravely ventured across the frozen lake to the mainland. Nels became the first Carlson to fish out of Fishtown, and today, five generations later, Carlsonâ€™s Fishery is still buying and processing fresh fish caught in Lake Michigan. The Buckler, Clauss, Firestone, Johnson, and Maleski families also made the journey across the Manitou Passage to set up their fishing operations in Fishtown, with their traditions likewise helping to shape Fishtown into what it is today. 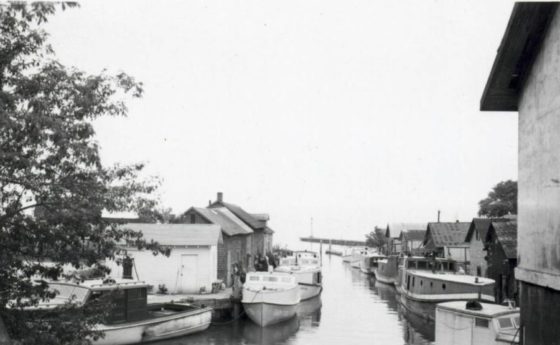 But there is a more enduring connection between the islands and Fishtown through the Grosvenor family, who own Manitou Island Transit and operate the ferry service.

In the early 1900s there were several different men who operated mail boats between Leland and the islands. Tracy Grosvenor began assisting in the mail and ferry service in 1917 and soon took it over. He knew that the boat was a lifeline for the islanders to the mainland, and that his dependability was crucial, especially in times of emergency or harsh weather. Venturing out in ice, rain, or snow was not something that Tracey and subsequent generations of the Grosvenors shied away from. In addition to hauling passengers, the mail, and medical supplies, the mail boat delivered groceries right from the Leland Mercantile that still operates today up the road from Fishtown. Sometimes, the boat would bring a doctor when families needed help, as there were no doctors in residence on the islands. Most of all, the Grosvenors believed in the comfort of the mail. Enabling those isolated on the Manitous to communicate and retain relationships with those on the mainland was a source of pride for the mail boat business. The family continued the service for 67 years until the islands were designated as a National Park and part of Sleeping Bear Dunes National Lakeshore.

â€œDependabilityâ€ seems to be a common theme throughout Fishtownâ€™s history. Back in its earlier days you could count on the sounds of the fishing tugs motoring in and out of the river, as well as the sight of fishermen mending nets along the dock. Everyone who worked in Fishtown could depend on one another, whether for small things or to come to each otherâ€™s aid in an emergency. â€œIt was a tight community,â€ says Mike Grosvenor, the third-generation ferry captain. â€œYou made sure everybody was home when they were supposed to be home.â€ Mike felt a comradery with the fishermen in Fishtown, one that was passed down through generations, starting with his grandfather, Tracy Grosvenor.

In place of the mail boat, the current day Manitou ferry, the Mishe Mokwa, brings passengers in the spring through fall months to North and South Manitou Islands. Although there are no longer residents on the islands, hikers, campers, and nature-lovers flock to the Manitous to enjoy a day trip or a few nights at one of the campgrounds. The staff at Fishtown Preservation urged me to visit the islands while I am here for the summer, insisting that it is a signature experience and an important trip to make when living in the Leland area. I am so glad that I did, and that I was able to discover some of this regionâ€™s history and how the islands fit into Fishtownâ€™s past and present.