Fishtown Then and Now

Fishtown Preservation Society aims to preserve the past and future of Fishtown. Many of the historical shanties built near the start of the 20th century are still standing today, with only a few minor renovations. Starting as a booming fishing town and transitioning to a beloved tourist destination by the 1960â€™s, Fishtown never abandoned its traditions or values. It continues as one of the few remaining commercial fishing towns in Michigan.

I collected a series of photos to take a look at the past and present of Fishtown. Photographs capture more than a simple image; they can hold a particular feeling or sentiment within them that reveals a hint of what it was like to be there at that time and place. It is interesting to find the differences between the photos I put together, but even more fascinating to discover all the similarities that remain. 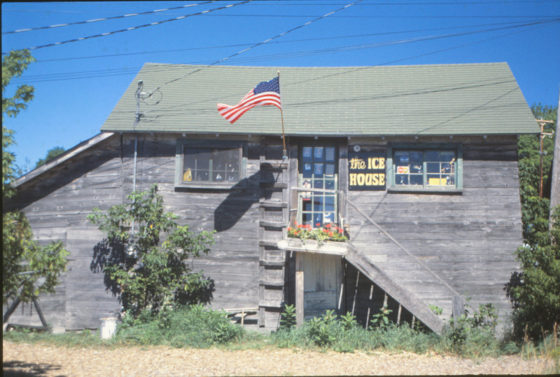 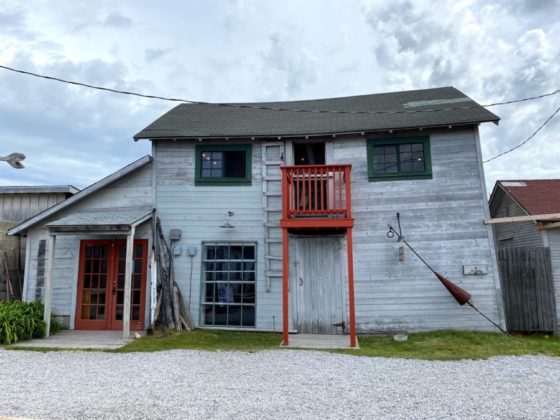 The Ice House was an essential building used for storing ice that would keep the dayâ€™s haul of fish fresh before it was to be prepared or sold. The entrance was on what looks to be the second floor, though the inside consisted of one large room rather than two floors. The building was built into a hill for temperature control and the ice would be piled high and insulated with straw to keep it cold through the summer months.

The Ice House today holds Fishtown’s Art Shanty on the lower level and the clothing store, Haystacks on the upper floor. The Haystacks entrance, on the backside of the building is at street level on the second floor that was built in 1970. The Ice House, like the rest of Fishtown, has changed through the years in an effort to adapt to current day needs. 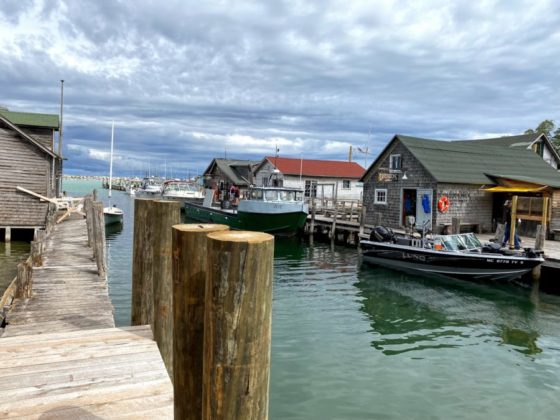 Fishtown Preservationâ€™s commercially licensed fishing tug, the Joy, proudly sits along the river in remembrance of the numerous tugs that once docked in Fishtown. Central to the mission of Fishtown Preservation Society, Joy still actively fishes for whitefish in the Manitou Passage, with Captain Joel Petersen continuing the commercial fishing tradition to this day.

The new piles and planks driven in along the south side of the river ensure that fishing boats and other vessels will be able to moor here for years to come. 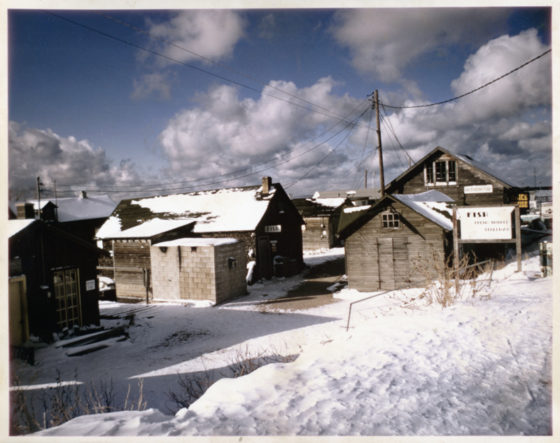 The shanties in the center of Fishtown (Main Street) have stood the test of time. However many of them have needed major renovations following years of harsh Lake Michigan weather and flooding.

To the right in the photo is the Welcome Center, once home to Henry Steffens’ net shed. The shanty is now a place where FPS can greet visitors to Fishtown, educating them about its history. 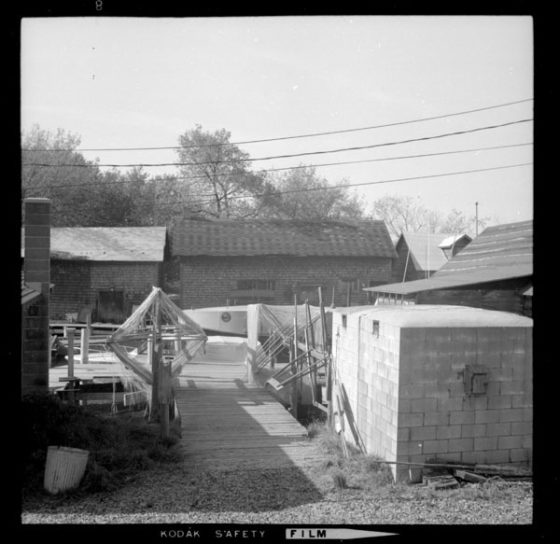 Fishing Net Reels and the Otherside Shanty Then 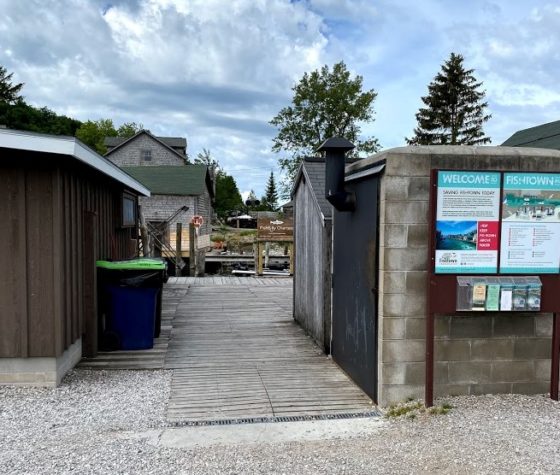 The large rotating structures that are still in place along the river in Fishtown today are fishing net reels that were crucial for the fishing process throughout the history of Fishtown. They are for gill nets, used by the gillnet tug, Janice Sue. The nets were wound around the reels so they could be dried,and mended. A few reels remain in Fishtown today and serve as a reminder of the meticulous process of caring for fishing nets.

The Otherside Shanty seen in the “Then” photo behind the fishing tug, was renovated in 2000 into a two-story vacation rental around the core of the old shanty. The shanty was removed from the rivers edge in late 2020 and is temporarily located behind the Morris Shanty on the southside of the river. It was lifted so the failing foundation could be replaced and to undergo structural repairs after sustaining damage from high water and recent flooding. Fishtown Preservation plans to return the Otherside shanty to the river by mid-summer 2021. 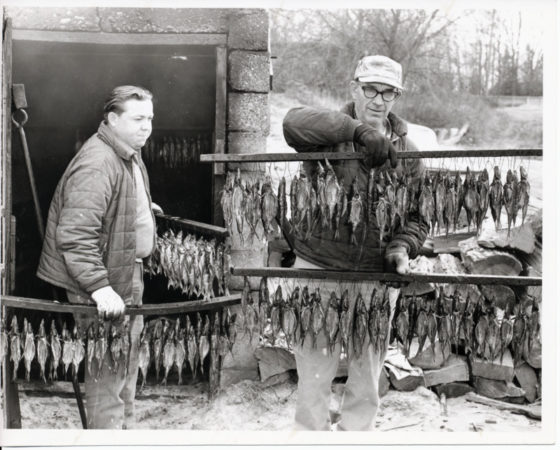 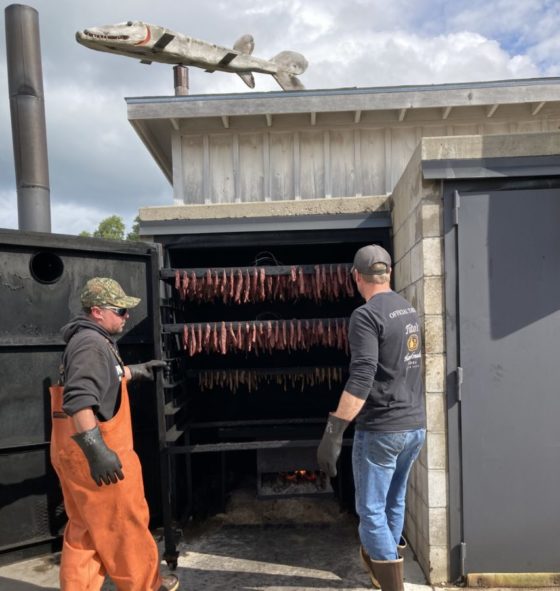 In the “Then” photo, smoking fish, is a tradition still done in Fishtown just as in the years passed. Roy and Terry Buckler can be seen unloading freshly smoked fish from the wood smokers. Today, Carlson’s Fishery has expanded their smoked offerings to included beef jerkyâ€”cooked using the same smoking techniques used for fish. Knowing exactly how hot the wood fire burns and compensating for the direction of the wind that day is all part of the learned artform of smoking fish and jerky.

Each photo uncovers a small piece of Fishtownâ€™s history. Fishtown has changed a lot over the years, but the community it was built upon continues to grow and uphold the traditions that were established more than a century ago.