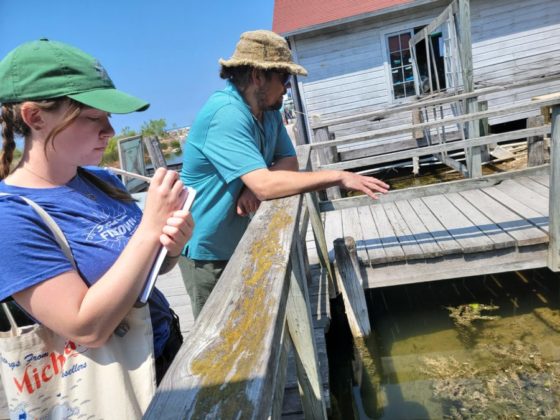 Fish are underrated creatures. With stunning diversity and complex life histories, they inspire well-deserved appreciation. Staring at the Leland River that runs through the heart of Fishtown, I was amazed at the world that lies right below my feet.

To learn more about the river in Fishtown, I was able to meet with Matt Heiman, the Leelanau Conservancy Director of Natural Land Protection. We stood on the docks overlooking the water last week on a day when the sun was too hot for the usual crowds to gather. Matt, a biological scientist and long-time fish enthusiast, was happy to explain the shifting ways of life that the fish experience throughout the year, as well as identify the passing species we encountered. His office is only a short walk to Fishtown so he loves to stop by to unwind and check up on the fish in the area. Excited to uncover a bit of the science side of Fishtown, Iâ€™ve decided to share the wonders I have learned so far.

Currently, the smallmouth bass population is spawning in the Leland River. They prefer to spawn upriver where the males begin building nests to attract females once water temperatures reach 60â„‰. They lay eggs on gravel, allowing for water flow through crevices between the rocks. This ensures that the eggs are receiving oxygen-rich water as they incubate.

Once the eggs are laid and fertilized the females leave the nests and the males act as guardians from predators and silt. If too much fine sediment is agitated on the seafloor and travels up into the water column, it may settle on the precious eggs. The careful fathers are vigilant at all times, using their tail fins to fan away any settled silt lest it disrupts the eggsâ€™ oxygen supply. At this time of year it is best to give the bass a little extra space and keep fishing lures away from the fish while they protect their young during important developmental time.

I was able to acquaint myself with many other species as we spotted them in the river, including perch, rock bass, northern pike, bluegills, carp, and steelhead trout. It is difficult to distinguish between some species, but Matt highlighted the defining features that characterized each one so that I would be able to determine for myself in the future. The dark spots or â€œearsâ€ of bluegills along with the vertical stripes of perch serve as simple clues when identifying fish you may see.

The Leland Harbor, which is adjacent to Fishtown, acts as its own small lake. With shallow waters, low currents, and minnows aplenty, it is a thriving ecosystem, but not one that is worry-free. Matt pointed out a few villainous creatures lounging on the rocks that line the harbor wall, though they didnâ€™t look very menacing to me. In fact, they seemed too lazy to do any real damage, sunning themselves with their pectoral fins splayed out on the rocks beside them. I learned quickly, however, that they have a dangerous secret lurking beneath their skin.

The round goby is an invasive species. They originate from Europe, and have since been introduced to the Great Lakes, possibly through transatlantic ship ballast water. Despite their small size, they are aggressive, known to steal the eggs of nesting bass and other species, and worst of all, accumulate botulinum toxin. This toxin is extremely harmful to mammals and birds, but quickly accumulates in the round goby through their diet.

I have heard of botulinum toxin outbreaks in fish before, but I wasnâ€™t sure what their origins were. Matt explained that the toxin is thought to prosper in anaerobic environments, or those lacking oxygen, where they grow on sediments and plants. Zebra mussels, another invasive species to the Great Lakes, are filter feeders that mobilize and filter the particles that lie dormant at the bottom of lake beds. They ingest botulinum toxin, and are later ingested by the gobies until a lethal amount accumulates within the small fish. While it doesnâ€™t kill the gobies, we can see the impact of this bioaccumulation as migrating diving ducks visit Leland each year and begin to prey on round gobies. Seabirds die every year with links to botulinum toxin, all starting with one invasive species.

During my marine science studies in school, Iâ€™ve learned that understanding the ways of life of the animals around us leads to an increased appreciation for them. It is important to be aware of the threats that they face if they are to be protected. Picking up trash or bits of fishing line from the docks and streets surrounding rivers ensures that they wonâ€™t make their way into important ecosystems and harm processes that keep population numbers at a healthy level, such as spawning.

The snapping turtle I met while eating lunch near the river

I seem to meet a new creature each day I am in Fishtown. It is easy to forget that we share our beloved fishing town with countless animals that depend on the river and coastal ecosystem. Soaring gulls scan the shores while schools of minnows scavenge just below the waves. Sometimes, a playful river otter may be spotted peeking out from beneath the dock. Just yesterday, I was delighted to notice a handsome young snapping turtle swimming past me as I was eating my lunch on the river. I never know what I will encounter next when wandering around Fishtown.

There is a whole community built around fishing off the docks in Fishtown. I was curious what draws people to fishing, why it has become such a beloved pastime everywhere I visit. Matt has spent many years fishing off the docks early in the morning before heading into work. I asked him why he enjoys fishing, and what it means to him. To him, the answer was pretty simple. While fishing, he can â€œinteract with something heâ€™s always been fascinated withâ€ and learn more about fish every day. He canâ€™t think of a better way to spend his time.

Fishtown Preservation Society (FPS) plays an integral role in preserving not only the place, but the animals that live and prosper in Fishtown. Ensuring that there is a spot for fishers, birdwatchers, and nature-lovers of all types is an important part of the work of FPS. Next time you get the chance to visit, take a moment to watch as the fish swim by or listen to the songs of the birds overhead. No matter the weather or time of day, Fishtown is always brimming with life.