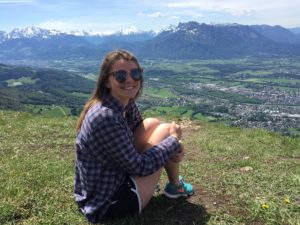 Grace on Gaisberg outside Salzburg, Austria

My name is Grace. I’m a rising senior at Lake Forest College, originally from a suburb north of Chicago, and one of Fishtown Preservation’s interns for this summer. This blog will provide a perspective of Fishtown you might not have encountered: the perspective of an outsider, someone who had no relationship with Fishtown before now and has been quickly ushered into its inner workings. During my time at Fishtown, I hope to explore what makes it special to me, but also what draws people here time and time again, locals and visitors alike.

This past semester, I lived in the endlessly beautiful and mountainous city of Salzburg, Austria.  Suffering from a bite from the travel bug, I applied to Fishtown  Preservation Society and, just ten days after returning back to the States, packed my bags for beautiful northwestern Michigan. While I am at a time in my life where everything seems temporary, Fishtown is a forever kind of place .  There are entire networks of people who have special and long-lasting connections to Fishtown.  From the outside, it might be difficult to grasp why these people feel so strongly when Fishtown appears to be just a collection of shanties sitting next to the blue expanse of Lake Michigan.  Though the weathered cluster of wooden shanties are integral to understanding Fishtown’s importance in the commercial fishing industry, the cultural history and social ties between families, tenants, and businesses provide an even deeper sense of what makes Fishtown special.

If you had asked me a few months ago why people want to preserve a place like Fishtown, I would have struggled to give a real answer backed up with the information and evidence I have now.  After just a few weeks of this internship I am beginning to understand that the real answer is complicated and rich, just like Fishtown’s history.  Fishtown is one of the last genuine links to an industry that shaped coastal Michigan forever, and Fishtown Preservation Society works to maintain that link regardless of how much the industry itself has changed.  As the global economy grows, we lose out on cultural microcosms like Fishtown. Commercial fishing is no longer the economic powerhouse it once was here in Michigan, and that loss is accompanied by the loss of social structures and generations of families who built their lives around boats, nets, and docks.

Fishtown Preservation Society dedicates itself to the mission of protecting the memory of coastal Michigan’s fishing towns by maintaining a town of its own.  Fishtown represents something much larger than the boats rocking gently in the Leland River and the shanties that occupy the lakeside land.  Fishtown is the last of its kind, a living, breathing community whose presence is integral to coastal history.  If these few weeks have convinced me of anything, it is that Fishtown really is a forever kind of place, and I want to spend the next two months figuring out why.